“When a person acts in his own interest, he frequently promotes (the interest) of society more effectually than when he really intends to promote it.” – Adam Smith 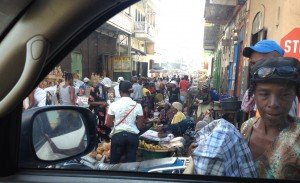 Capital flows to where the expected return is the greatest.

I knew this academically as a teacher/professor and I knew this practically as an investor and entrepreneur, as this is what causes stock and business prices to increase or decrease over time. But I never experienced it as “raw” as I did as when I was living in Haiti. (See picture of the Haitian street market.)

It’s now five years after the devastating earthquake in Haiti. And people still ask me:

The simple answer is that WE can’t. And even if WE could, WE shouldn’t even try. You see, WE, as Americans and those who live in developed economies, see everything through the lenses that were created by the greatest economic system ever known to humans. (If you ever want to read how the American economic system became what it is today, read Andy Kessler’s “How We Got Here.” It’s a free download here.)

Opportunity cost (giving up something to choose something else) is something that every person and business owner in the world deals with every day, almost every hour of their life. No one person or business has unlimited resources. Every day we have to choose how to use our limited resources to satisfy unlimited wants. In the US, people may choose to buy a Big Mac rather than a Whopper or maybe it’s Gap jeans rather than Levi’s. In places like Haiti, it may be the choice between food or clothes. Either way, whether they reside in the US, Haiti, or somewhere else in the world, people do have a choice.

While I lived in Haiti, I was able to see that most of the groups, aid organizations, and non-profits are merely placing band aids (lots of them) on huge, gaping wounds.

I have seen first-hand now what’s been done – the “aid” – and it’s not working. Life in Haiti IS getting better for many people, but it’s not because of the massive amounts of “aid” being sent there. It’s because of entrepreneurs, both Haitian and foreign. These entrepreneurs, in a real life example of Benjamin Franklin’s old adage, are begging to be “taught how to fish,” rather than be given fish for a single day.

I spent a year in Haiti trying to figure out how to “help.” It has been my experience, as an entrepreneur and professor living and teaching in Haiti, that Haitians no longer want aid:

“Show us how to make jobs, Mr. Mark,” is a phrase I’ve heard over and over again.

Adam Smith, the “Father of Economics,” wrote about the invisible hand:

“Every individual…neither intends to promote the public interest, nor knows how much he is promoting it…he intends only his own security; and by directing that industry in such a manner as its produced may be the greatest value, he intends only his own gain, and he is in this, as in many other cases, led by an invisible hand to promote an end which was not part of his intention.”

There has been a lot of talk over the last century (and especially in the last 5-7 years) about the evils of capitalism and its lethal life-blood, the “free market.” And just like anything in our world, good things can be used for ill.

However, the most powerful economic system (to make sure I’m clear, I’m referring to capitalism) has been used to provide the greatest amount of good to the largest amount of people. And it all happened because of millions of people focusing on their self-interest and trying to take care of their family. This includes both business owner/practitioner and the investor. To argue against this shows a true lack of understanding of both basic economics and the reality of history.

Capitalism, in and of itself, is not a cure-all. The invisible hand does seem to slap us on the face from time to time. But it’s usually because of one of two issues:

1. some market manipulation, allowed or promoted by some overreaching governmental decree, law, or mandate; or
2. a misreading of what “the market” truly wants.

So, how can WE help the poor?

Determine what the market wants and figure out how to profit from it.

This will provide a return for investors, and, just as important, jobs and dignity for Haitians.

It’s never simple, but this is a great place to start.