See related blog post: Why I have no desire to change the world

We have developed something we call the Give-Greed Continuum to help explain this fascination with changing the world. “Give” is on one end of the spectrum with “Greed” at the other end. We’ve crudely drawn the continuum to look like this:

Tom, as an expert in human behavior, says that humans are “cognitive misers.” It’s true; we try to create mental shortcuts to describe complex situations. This is true when we, as humans, use mental shortcuts to explain things like “give is good” and “greed is bad.” But people fail to look at the consequences of each of these concepts. Greed is seen as being “selfish” and to Give is seen as “self-less.”

What if I give everything away? Am I now not in a position where someone else would need to give to me?

And, why do people give? (Is it to benefit them – through a tax break or an ease of conscious?) Is it possible that giving is actually selfish?

Let’s be completely clear: We are not trying to justify greed, per se. It is, after all, one of the 7 deadly sins. Greed is selfish. Being a Crony Capitalist is about being greedy and selfish (see post: Stealing Capitalism Back). 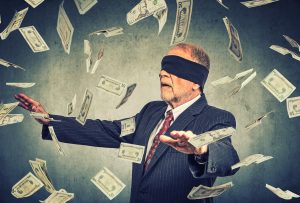 Mark often jokes that Americans have BIG hearts and tiny brains. Americans are fabulous in times of crisis, but do not understand the negative consequences of continuing to give to “causes.” Mark has run both for profit companies and a social, non-profit venture (Hoops for Haiti) along with living in a third world country. He has seen the good produced by giving but also the harm.

It’s evident that many others have seen and/or experienced as well. That’s why Social Entrepreneurship and Social Ventures have become such hot topics and promoted in universities across the world.

Social ventures have been started by people with the desire to help, knowing that they can’t give everything away, but that they need to “use the principles of business” to be able to change the world.
So, if we go back to the Give-Greed Continuum, we can now add Social Entrepreneurship (SE).

Most social ventures are considered “better” or a more “righteous approach” (self-righteous?) to business because there is a desire to only get to sustainability, or enough to keep going. This way, many social entrepreneurs wrongly believe, they can eliminate the profit motive, because if the profit motive can be eliminated, so can greed. (But, as we’ve seen now, it can shift to other forms of greed.)

Another problem with social ventures is that social entrepreneurs, many of whom are seemingly trying to fix the world’s social problems, are also often driven by ideology or activism, and not necessarily by what the market is asking for.

Where does the business owner (BO) who is trying to build or maintain a business, but not necessarily by phony, crony means? That group is likely closer to the “Greed” side of the continuum.

Let’s also be completely clear about the following:

– self-interest is not equal to greed

– profit is not evil

We are not rejecting charity or philanthropy (it is critical in many areas – but please stop giving back), but we are declaring two things:

It is good to be aware of the Give-Greed Continuum because increasing one’s self interest at the expense of others is never good. And, unfortunately, this can be done at all points of the continuum.

Being an Impact Capitalist requires one to find a balance between one’s self interest and the needs of others. This is how we make an impact.