It has been awhile since I have posted a blog on Impact Capitalist. I’ve been focused on building 3 different companies and the content that goes along with building each of those companies. You can read about the companies I’m building and the content development with each below:

I am very excited to be working on these companies because there is a need in the marketplace for these companies. There is change and disruption coming to many industries. I might argue that change is not just upon us, but it is here.

What is really exciting (and scary for many people) is that things are changing. The world is going to be an entirely different place five years from now. Especially as it relates to business owners and entrepreneurs. Again, this is both excited for some people, and scary for others.

Over the weekend, I read an article in Fast Company about how those over the age of 50 need to be very leery of Entrepreneuship. The reason? “Entrepreneurship – a fancy-sounding word often interchanged with self-employment – is less likely to provide critical benefit that are tied to a traditional workplace.”

“Traditional” in what context? The previous generation? The article is about entrepreneurs who are 50 years old or older. If that’s the case, it’s only the parents generation that had these “critical benefits.” Maybe for those closer to the age of 50 it might be their parents and their grandparents.

The reality is that “critical benefits that are tied to a traditional workplace” are:

a.) not as “traditional” as one is being led to believe, especially in the context of human history.

b.) the world is already changing. The most recent data suggest that 40% of all Millenials will be part of the “gig economy” by 2020. Sounds like entrpenrenuership to anyone who understands what “entrepreneurship” actually is.

The social safety nets that were conjured out of thin air – employer-provided Health Insurance and employer-provided pensions plans – are gone and they are not coming back. And people know this. That’s why they are seeking alternative ways to take care of themselves and their families. 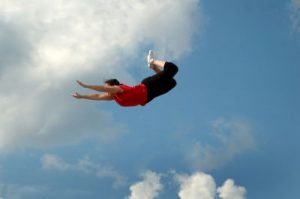 There is no such thing as a social safety net. Those who call for such – especially for entrepreneurs – are either clueless when it come to understanding basic economics or they are disingenuous and want “the government to pay for.”

We must remember that, relative to roughly 6,000 years of written human history, the 2nd half of the 20th century was an anomaly. “Social safety nets” and company-sponsored guaranteed payments to prople who no longer work for the company are not the norm. The 2nd half of the 20th century is an outlier. And no matter what people want to believe, one or two generations does not make something “traditaional.”

The real “tradition” is that of entreprenuers and entrepreneurship. While not called this word until the 19th century, humans are entrepreneurial by nature. This is who we’ve been throughout all of human history. Yes, “entrepreneurship” and “entrepreneurs” have been lately. However, the reality of life is that humans ARE entreprenuers. It is a survival mechanism built into who we are.

Entrepreneurs are survivors; they neither need nor want a safety net.